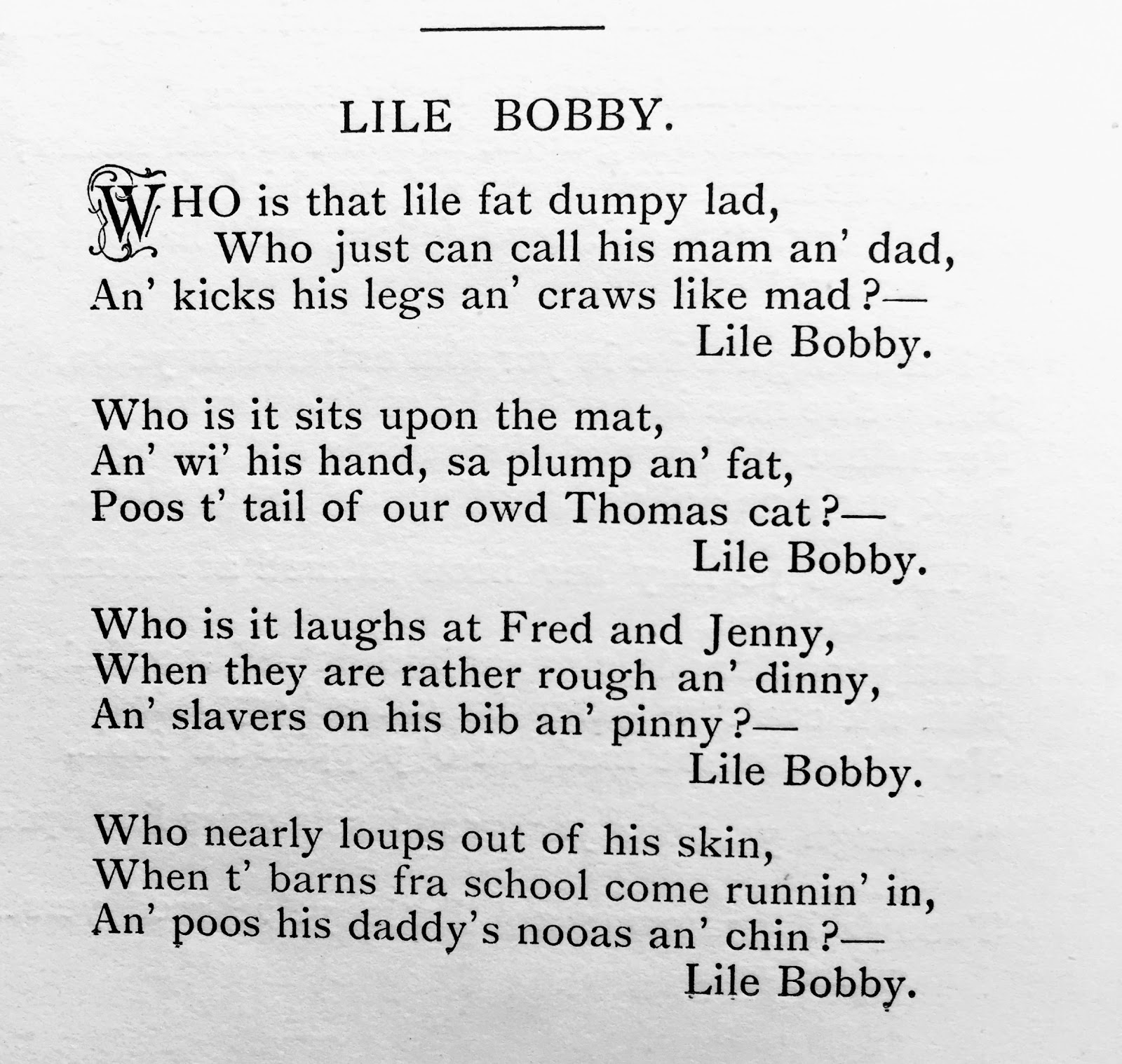 I remember sitting beside my father Greg listening to him reading our forbear Tom Twisleton’s poetic description of his own bairn ‘Bobby’ and the joys and challenges of having a baby in the house. After the verses above the poem continues ‘Who is it that can scream an’ rooar, or if he likes can laugh like stoor, an’ sometimes make girt dubs on t’ floor? Lile Bobby’. I was intrigued by baby Bobby ‘pooing ‘dubs’ on the floor’! Now Craven dialect is so little used I’m sorry Greg didn’t take up an invitation to read Tom’s poems on the BBC Home Service which preceded Radio 4. He’d certainly have read this one, probably read to him by his own dad and he’d have been pleased at Tom’s Centenary celebration organised two years ago. 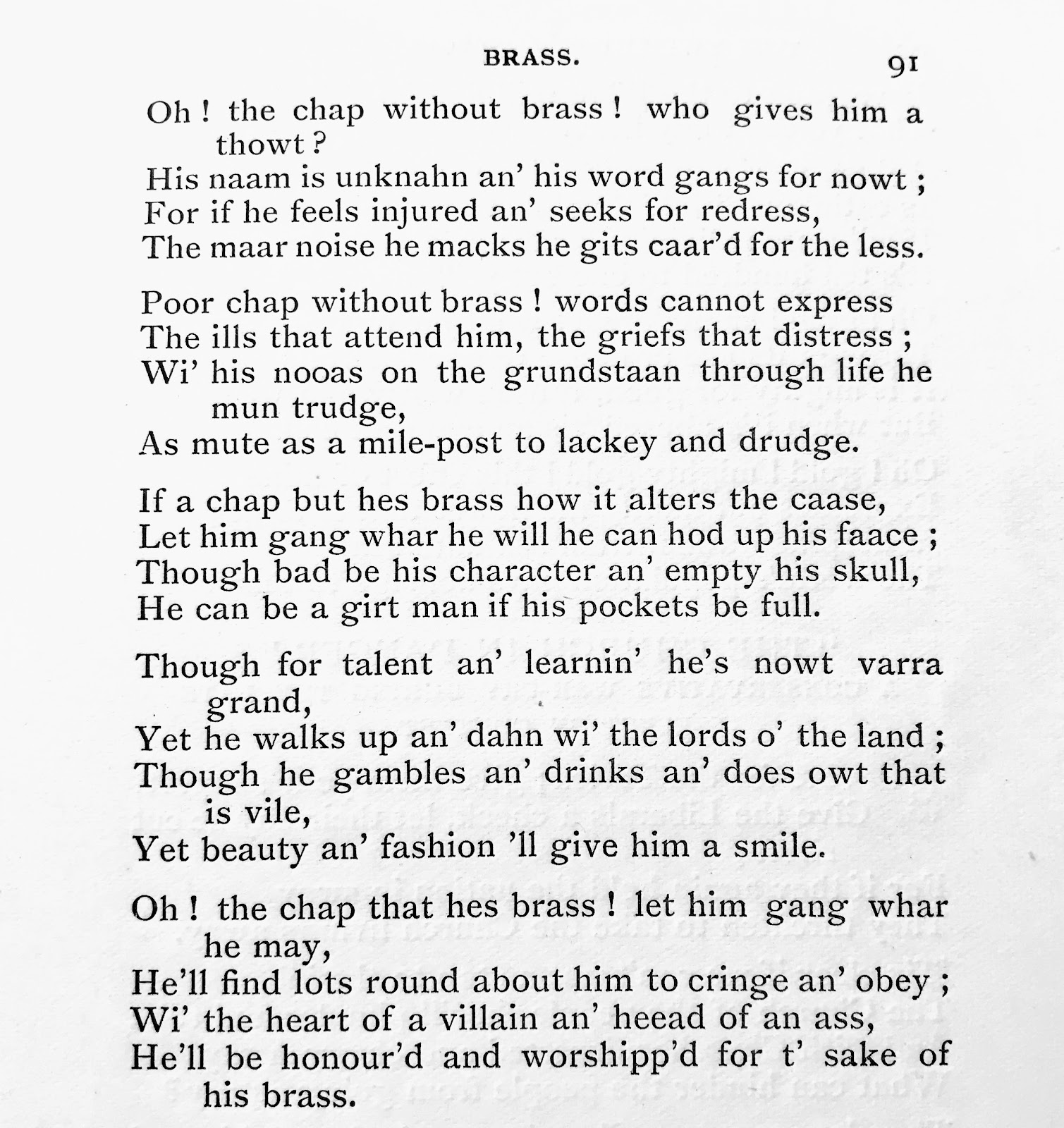 The power of money to make or break is captured in Craven dialect poet Tom Twisleton (1845-1917)’s poem ‘Brass’ which describes the humiliation that comes when folk run out of it. The poem starts by comparing ‘The chap without brass’ to ‘a cat without claws’ and though ‘nayther deficient i’ talent or pluck he mun stand on yan side or be trodden i’ t’ muck’. Without money such a one ‘to other men’s wills mun knuckle an’ bend’. Our poet captures the pride of a Yorkshireman in describing such humiliation, savvy to the way folk flatter the rich to take advantage of them. Money in Tom’s book gives you ambiguous greatness, as in the verse above: ‘Though bad be his character an’ empty his skull, he can be a girt man if his pockets be full’. 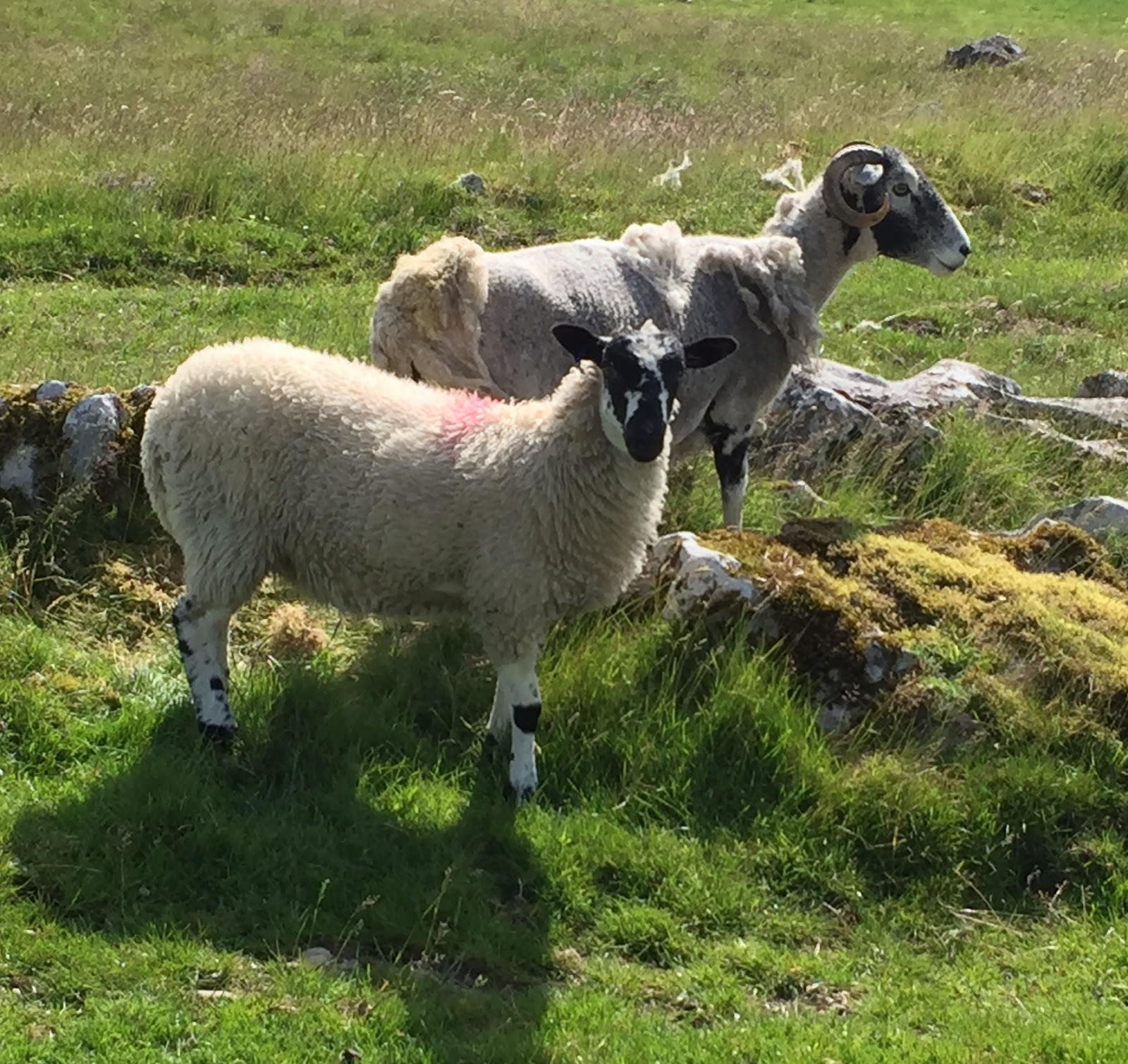 Craven dialect poet Tom Twisleton (1845-1917) describes how his writing is intermittent so that in the lambing season ‘hevin’ miss’d a deal o’ sleep, wi’ sittin’ up an’ watchin’ t’ sheep… my heead for thowt was just as fit as if ‘t were med o’ wood’. Tom’s early life was defined by the family farm which was their livelihood. As shepherd he struggles at times. A graphic poem describes how on the night of 3rd January 1865 ‘wi’ fleece au torn, I spied a sheep, an’ mony a bite did bleed: then t’ truth into my mind did creep, – ‘Them dogs hez done this deed’. Tom describes how he shoots two dogs: ‘I think I med a good neet’s wark, an’ ye’ll na doubt think t’ saam: I settled yan his ugly bark, an’ t’ other’s varra laam’. 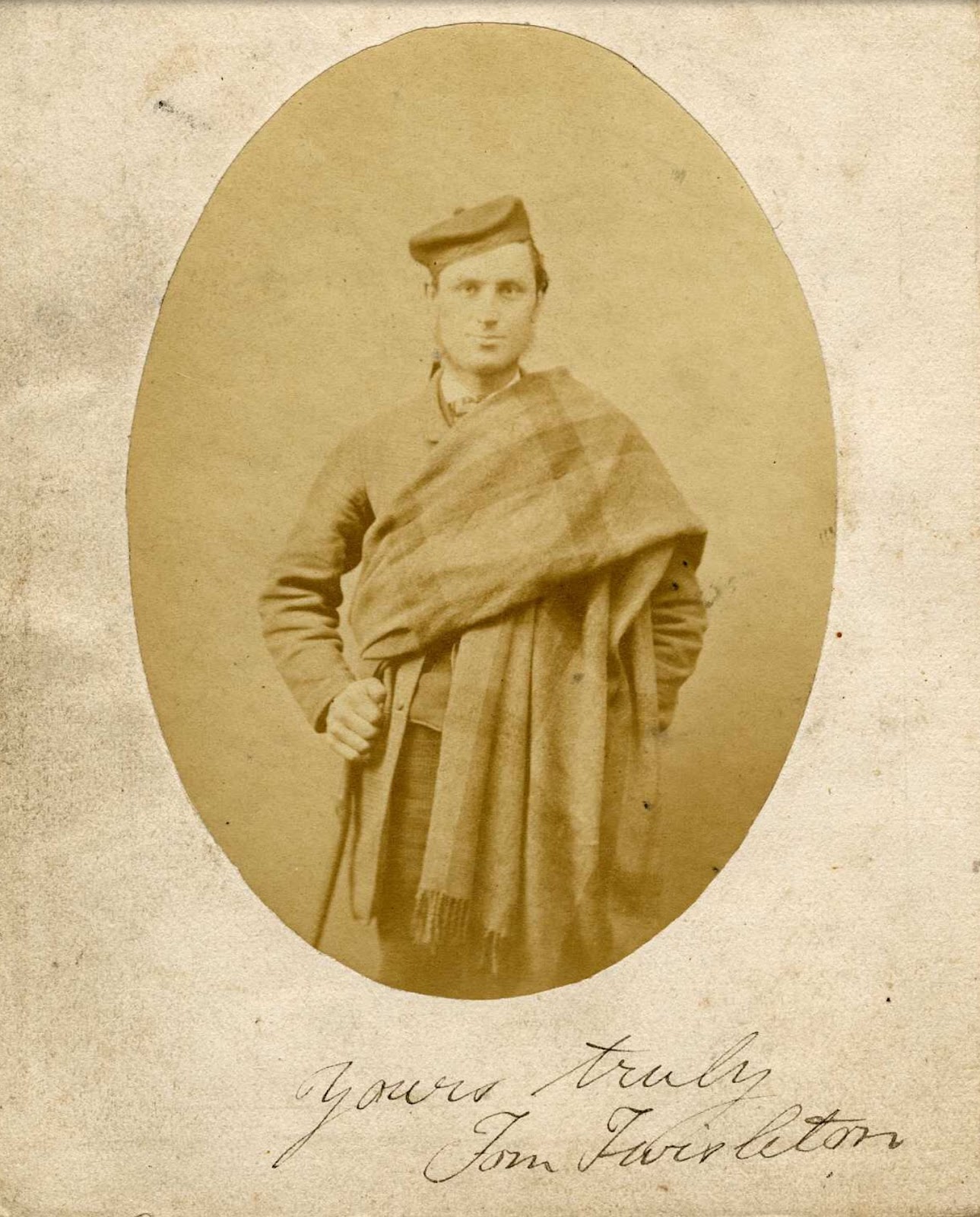 Maybe there’s a streak of vanity in this picture of my grandfather's cousin Craven dialect poet Tom Twisleton (1845-1917) cloaked like Burns but like Burns his descriptive writing goes right out of himself to what he sees before him and engaging his readers with that observation in heart and soul. Tom has the humility of Burns who said ‘I am no Poet in a sense’. The daughter of the Winskill Bard, as he was nick-named, writes how Tom ‘read the poets for sheer love of verse, and at the end of a hard day’s work in the farmyard or on the fells it was his delight to pore over some work of Scott’s, now and then reading aloud a choice stanza in his fine musical voice for his family’s pleasure’. 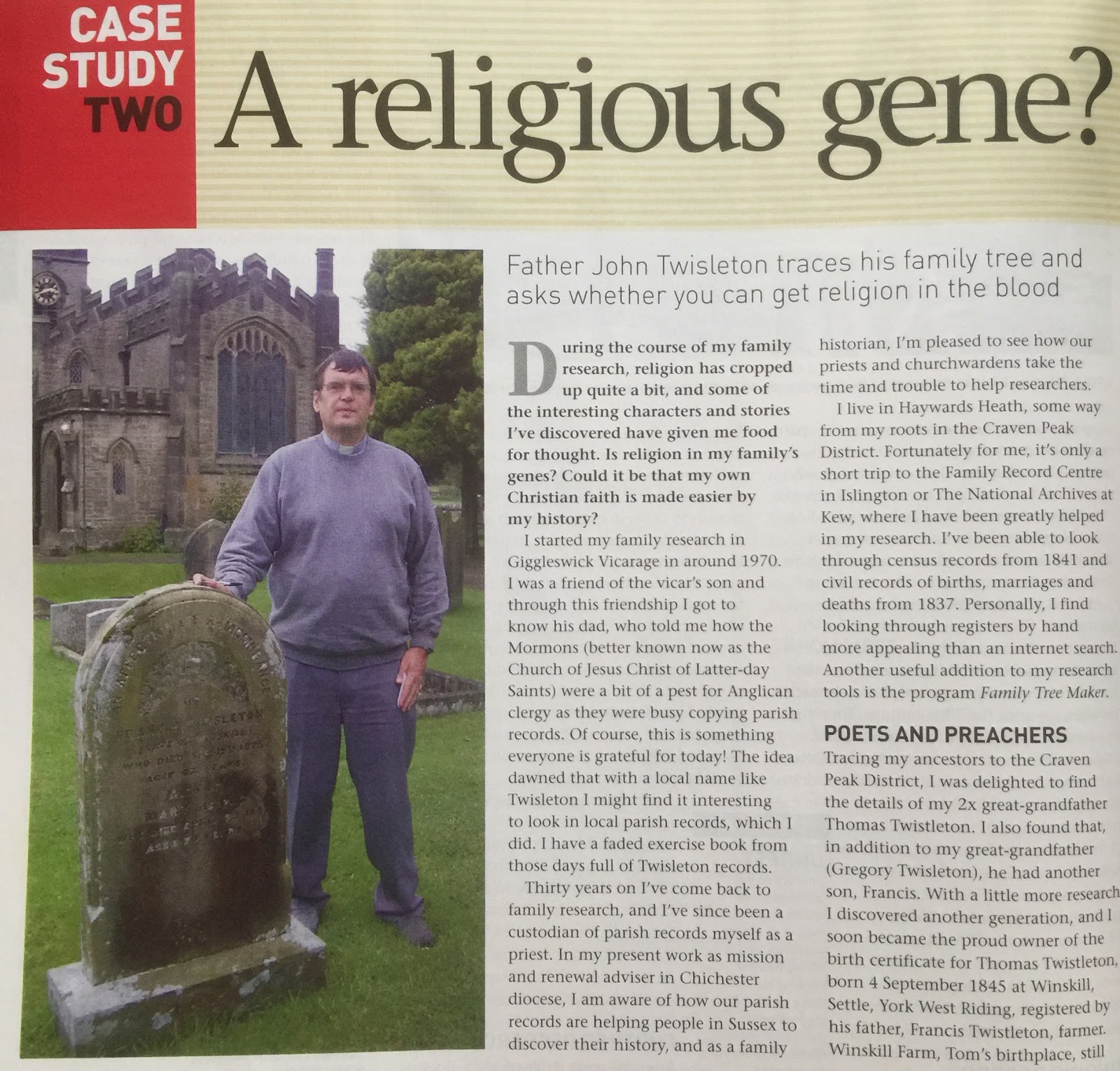 In July 2007 I published an article in Your Family Tree magazine entitled ‘A Religious Gene?’ The editor of that magazine had read an early account of my research on Twisletons and invited me to re write my account with a view to whether you can get religion in the blood. The ‘Religious Gene’ idea arose from American molecular geneticist Dean Hamer’s conclusions. After comparing more than 2,000 DNA samples Hamer concluded that a person's capacity to believe in God is linked to brain chemicals. His findings are naturally contested by those of us who see spiritual enlightenment as coming through divine revelation rather than the brain's electrical impulses. 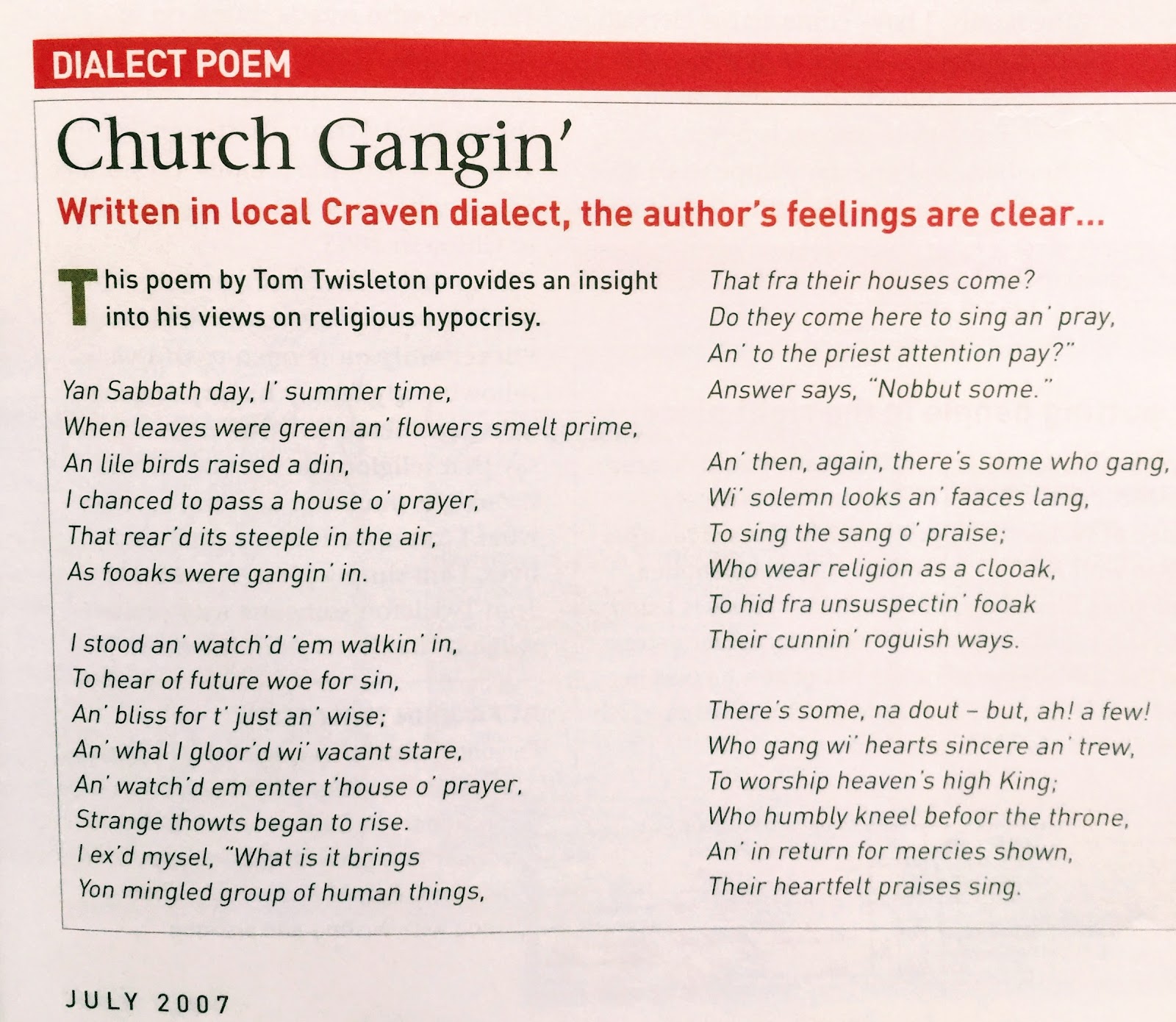 Is religion in the genes or not? What do we make of this idea subject of my article on the Twisleton family in Your Family Tree (July 2007)? It’s taken up by Richard Dawkins in his hypothesis that religions are memes, a sort of malignant social gene in his understanding. The religious response to Dawkins has been to protest that there is good and bad religion  Looking back on what I can discern of my forbears’ religion I am pleased to find especially in Craven Dialect poet Tom Twisleton folk who criticised formal religion and praised religion that flows from the heart. Despite the ‘manhandling’ of religion many believe religion is ‘God-given’. It's readiness and openness to welcome God that is the issue and that could have a genetic component. 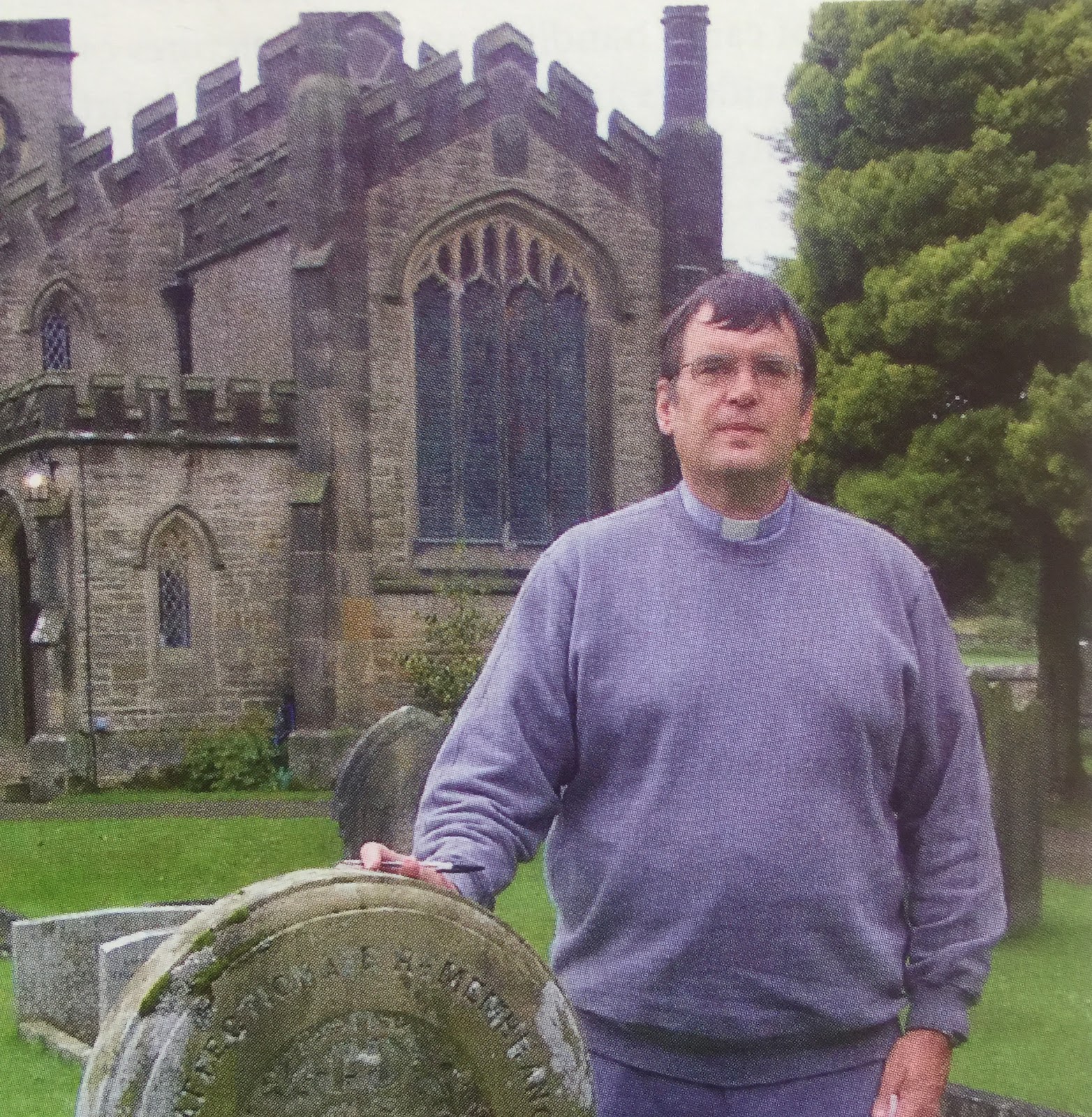 As I reported in Your Family Tree magazine (July 2007) in the course of my family research I have come across clerical Twisletons across the land: Bro. John de Thytelton (Vicar of Sheffield 1307), Adam de Twyselton (Canon of Worksop Priory 1351), Thomas Twisleton (Curate of  Swillington near Leeds 1724), D. Twisleton (Curate of East Ardsley 1755), Revd Mr. Twizleton (Vicar of Huddersfield 1734, 1739), Frederick Twisleton-Wykeham-Fiennes (1799-1887: Archdeacon of Hereford related to Jane Austen). The Revd Arthur Twistleton was one of the so-called “Cambridge Seven” who went out as missionaries to China in 1885 to labour for the spread of Christianity in that land bearing fruit right up to this day. 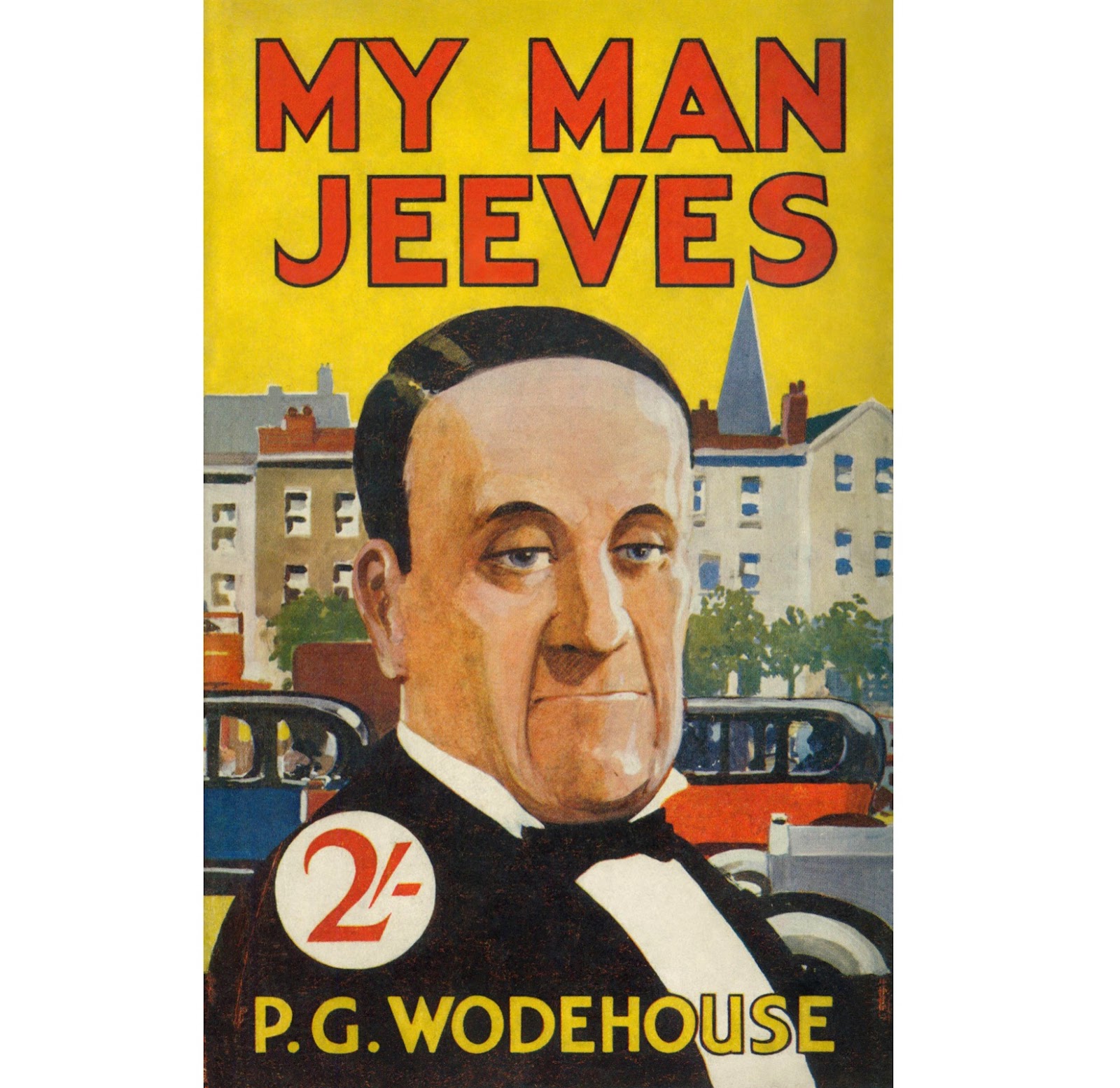 It is humbling for Twisletons that one of the most popular figures with our name remains fictional: Reginald “Pongo” Twistleton from the popular Uncle Fred books of P.G.Wodehouse! On his account being a Twisleton (let alone one from Giggleswick) always has a shade of comedy about it! Pongo is friends with Bertie Wooster, fellow member with him of the fictional Drones Club in London, served by Wodehouse’s valet Jeeves whose name has become generic for valets. A drone being a male bee that does no work, living off the labour of others, characterises the Edwardian stereotype of the rich, idle young personified by Bertie Wooster and our own Pongo Twistleton! 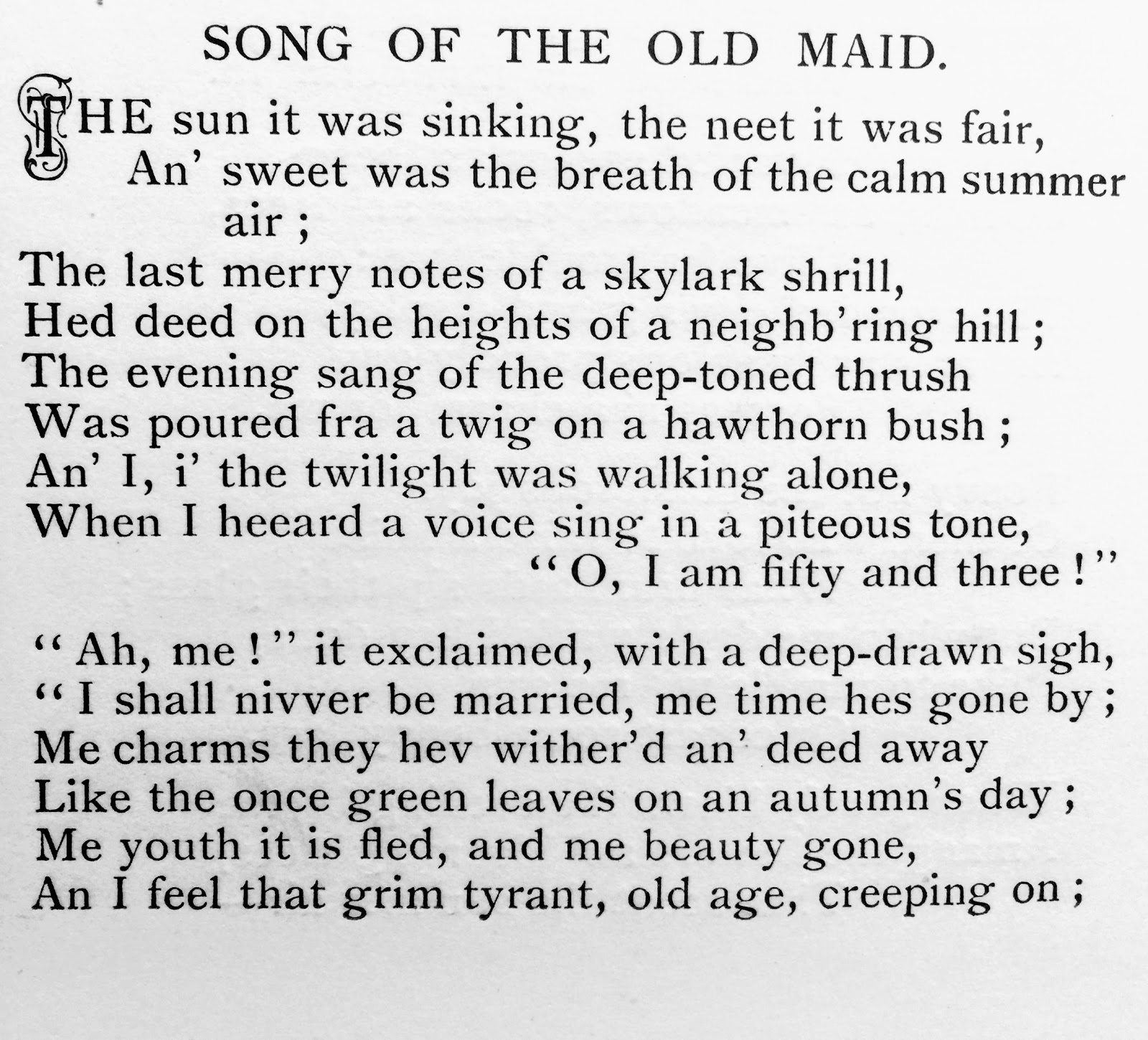 What would Craven Poet Tom Twisleton make of the singles culture of our day? In his day 1845-1917 marriage and family were insurance against hard times unalleviated by the state. For many of us they still are, even if we’d take with a pinch of salt his warnings against the young women of his day’s ‘choosiness’ when it comes to finding a husband. The Old Maid’s lament above ends with this verse: ‘Saa now, au ye lassies, ‘at’s turned twenty-yan, don’t be saa consated i’ t’ choice of a man; don’t set yersels up wi’ a heigh scornful air, but strike for a bargain whal t’ buyer bids fair; for youth is like summer - swift passin’ away, an’ soon ye’ll be like to a cowd winter’s day; yer strength will be wasted, yer beauty decay’d, an’ ye’ll find ye’ll be nowt but a stingy owd maid, when ye are fifty and three.’ 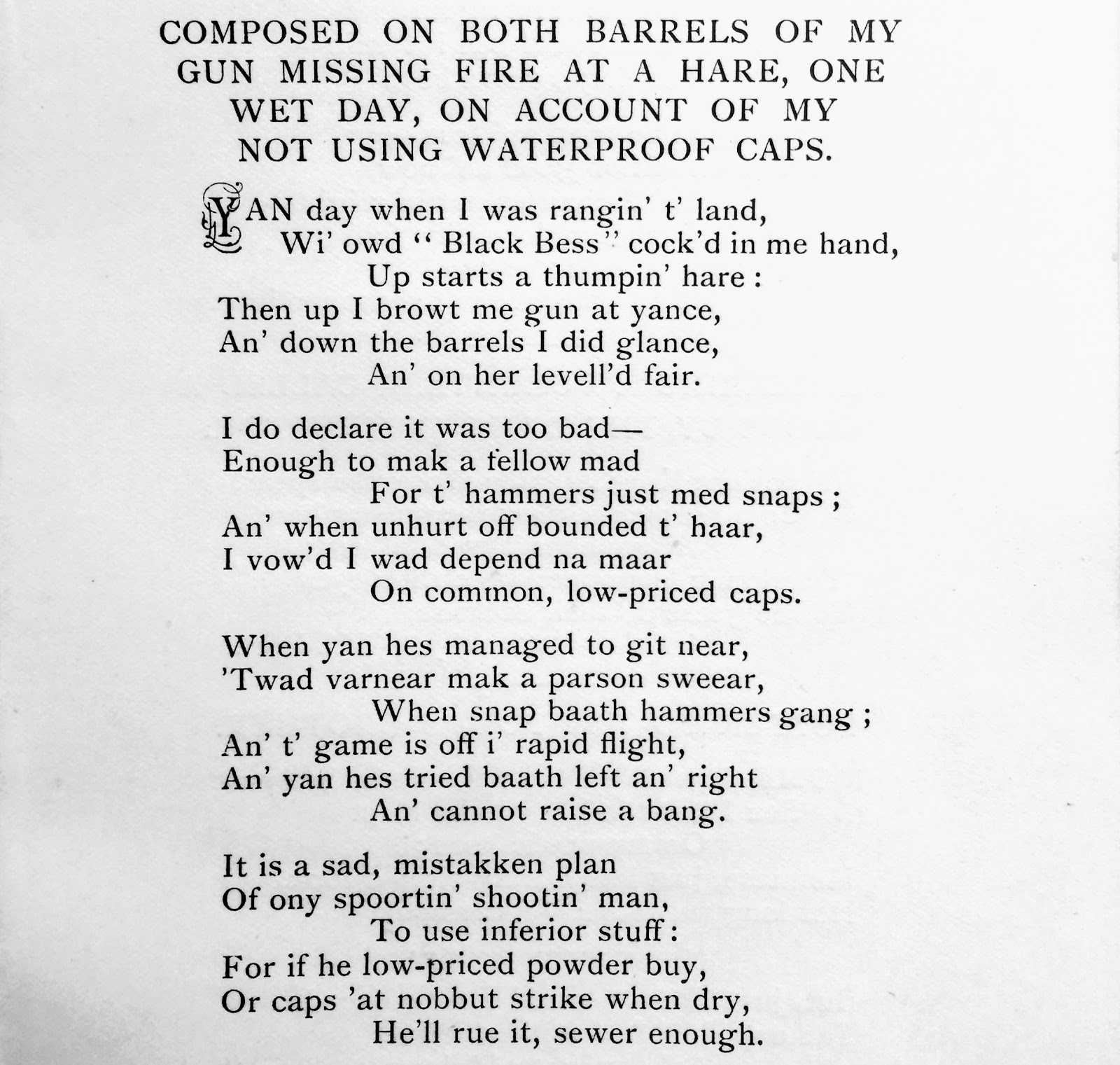 When I was a child I recall a bloody scene in the kitchen when I caught my mother Elsie ‘jugging’ a hare Greg my father brought back from a local shoot. My forbear Craven dialect poet Tom Twisleton (1845-1917) describes in this poem frustration he had one day in his attempt to find supper for his large family at Winskill. Shooting those days was wholly practical in that respect, relying on the latest technology, the double barrelled shotgun.  A hare was targeted but missed, as Tom makes poetical lament, through a technical hitch. He was out in the rain and forgot to put waterproof caps in his gun! 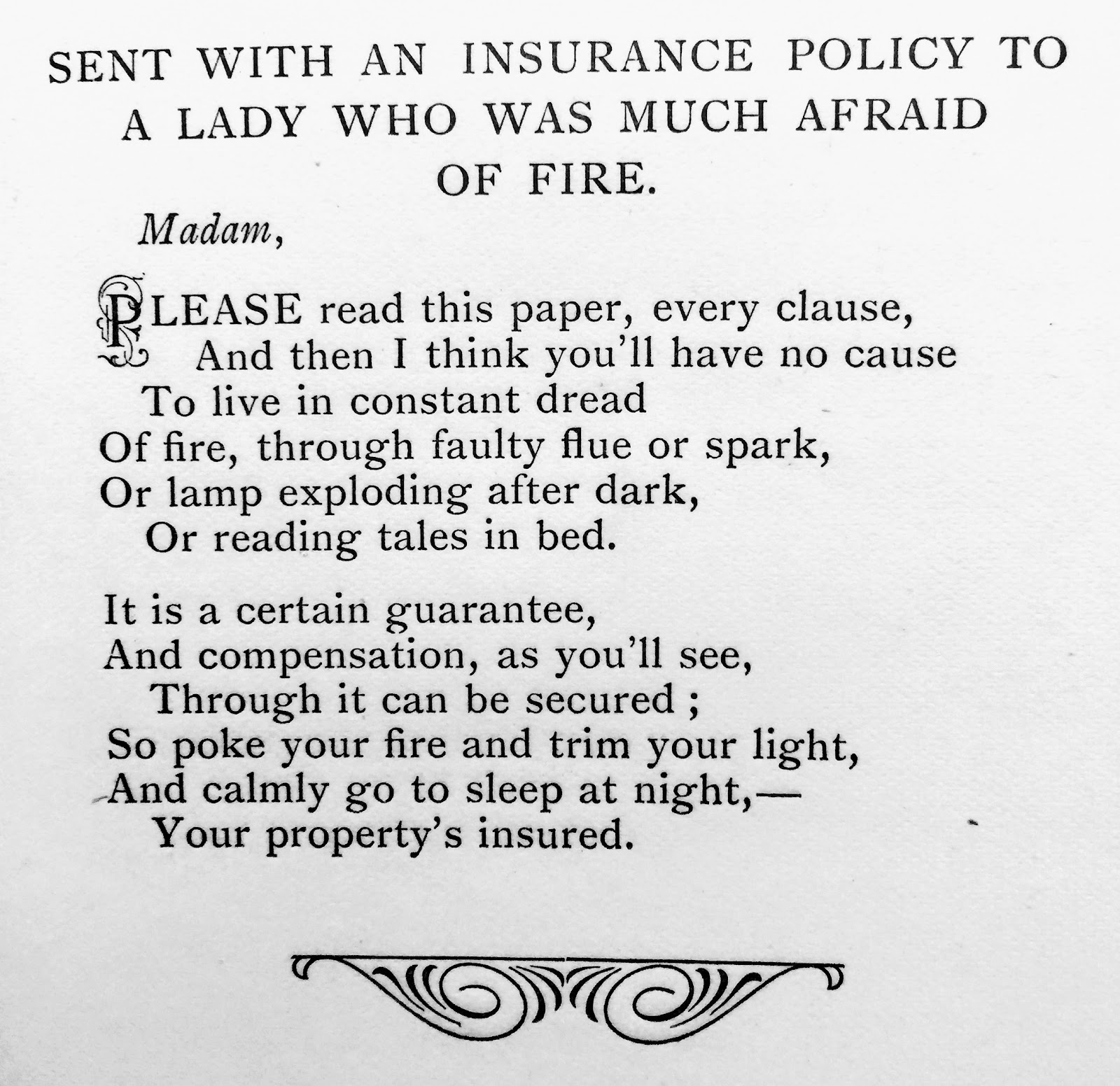 You can see from this poem how Tom Twisleton (1845-1917) moved later in life from farming into selling insurance. Life at Winskill farm provoked his poetry, along with reading Robert Burns, and this in turn built his way with words. ‘Sent with an Insurance policy to a lady who was much afraid of fire’ is appropriately the last poem in his 1907 collection and its rhyming has no Craven dialect. We assume, as for many Settle inhabitants, that a spreading of wings away from Craven had consequence for writing if not speaking. We know Tom continued to correspond with family members in verse and, as we see here, on occasion polished off a commercial deal with a reassuring poem. 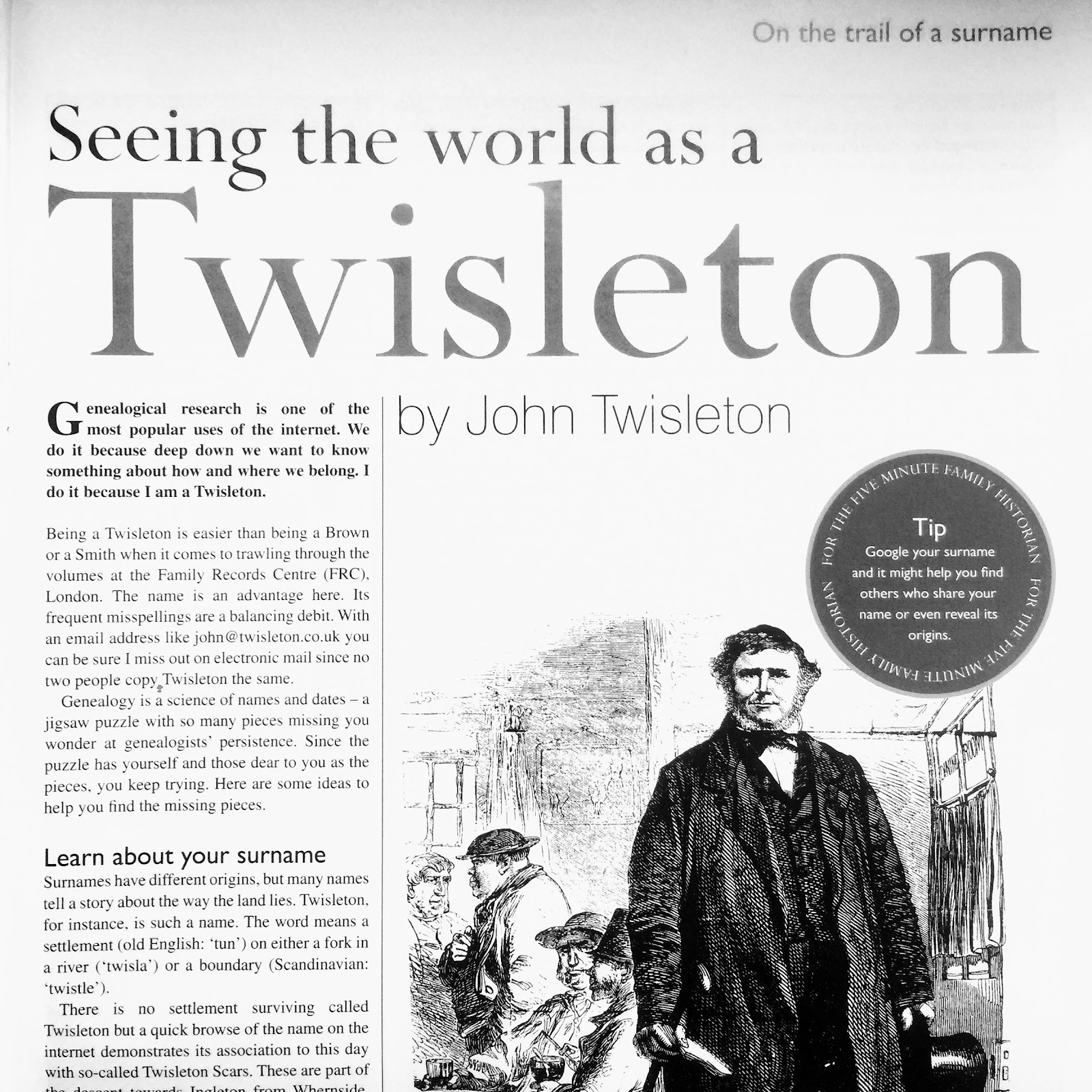 I groan at the misspelling of my surname and the need to correct it so e mails arrive safely and the like but it’s great to have a memorable if not spellable name. ‘Seeing the world as a Twisleton’ gives me an accessible platform on the internet and earlier here in Family Tree Magazine July 2007. Their series ‘On the trail of a surname’ gave me a chance to speak about my surname - meaning settlement (‘tun’) on a river fork (‘twisla’) - which through its rareness makes for easier connecting up with others of the same name. It’s origin and familiarity in Settle and its surrounds is a bonus and my research is proving a catalyst for Dalesfolk to engage with their history.
Brass Burns influence Church Gangin’ Lile Bobby My Man Jeeves PG Wodehouse religious gene Song of the Old Maid Tom Twisleton insurance agent Tom Twisleton the farmer Your Family Tree

Popular posts from this blog 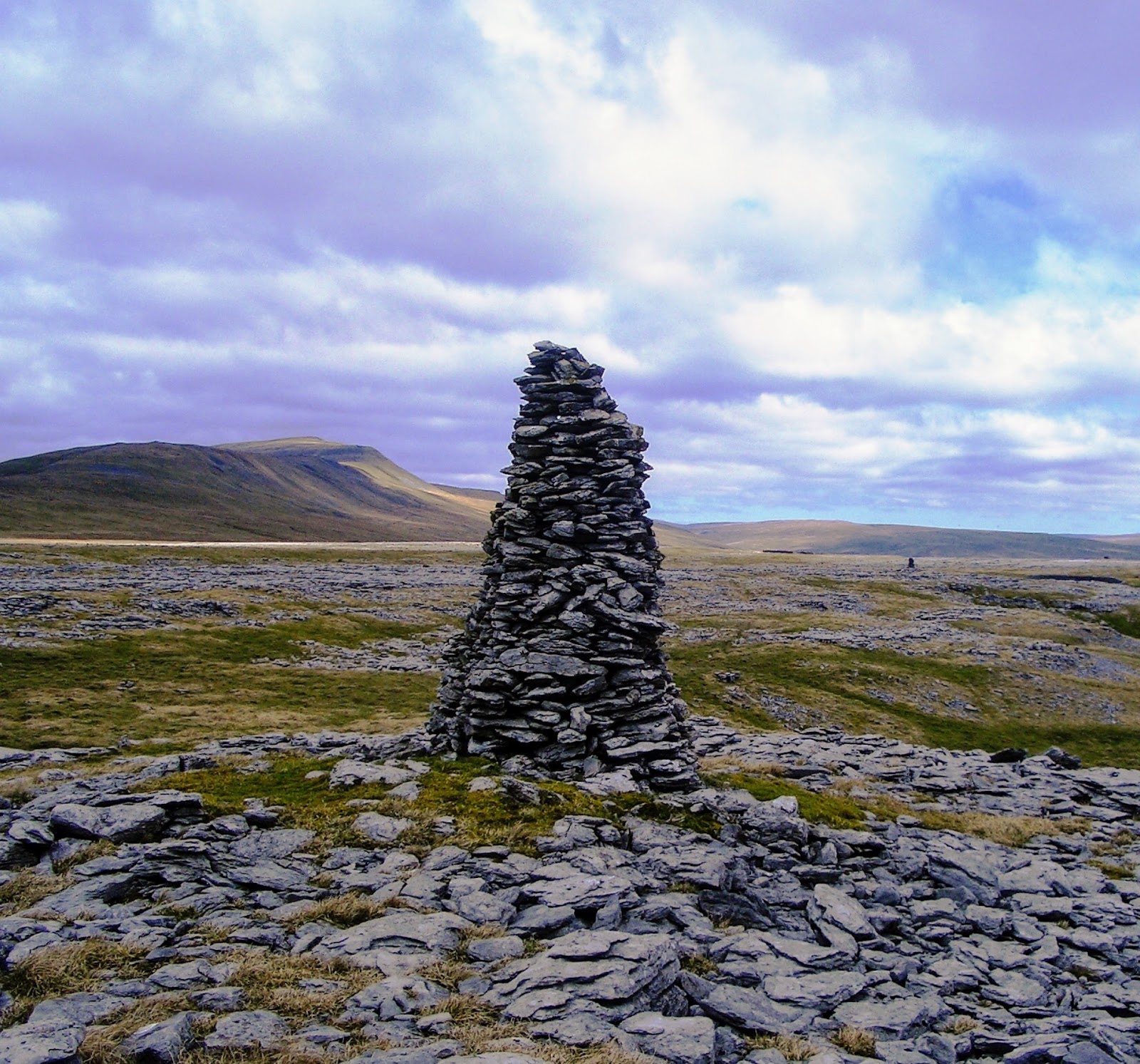 Who’d be a Twisleton? You’re as misspelt as what I just wrote - ‘mispelled’ is American - but you find your cousins sooner because the name’s quite rare. Its etymology is settlement (‘tun’ in old English) on a river fork (‘twisla’). The river valley fork in question for me is between Kingsdale (River Doe) and Chapel le Dale (River Twiss) either side of Whernside mountain in the Yorkshire Dales. Yes, I’m a Dalesman historically though now I tread the Sussex Downs. The southern slopes of Whernside are named Twisleton Scars where stands the defiant cairn featured on the picture. Twisleton Scars are recorded in Victoria County History as being held in 1316 by William of Twisleton who possessed lands below Ingleborough. Genealogical study affirms the continuity of life across generations and witnesses the unchanging traits of human nature. One of William’s relatives is named in a 1398 petition for the arrest of Thomas de Twyselton with others for breaking into Millom manor in Cumberland. A…
Read more 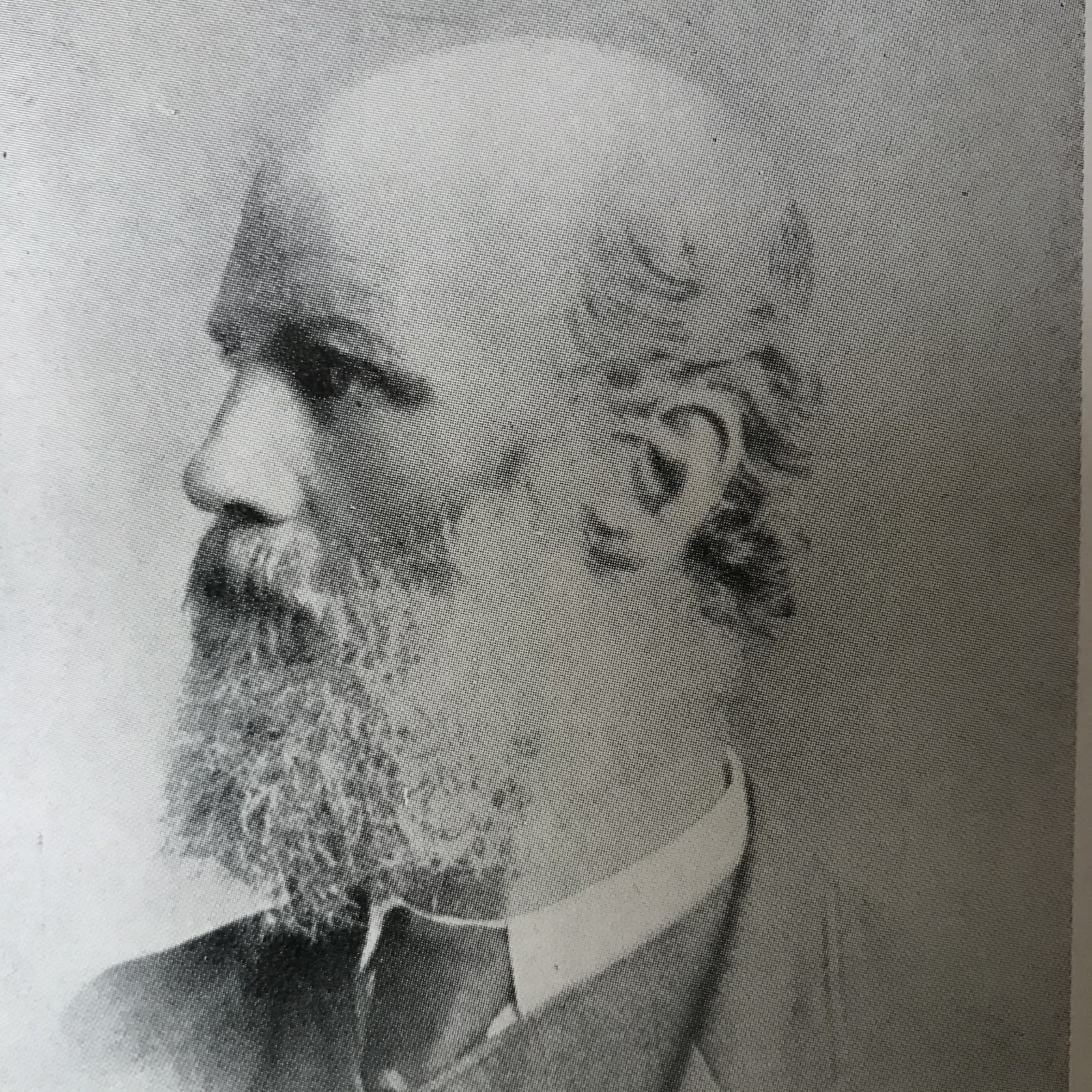 Settle’s 2017 celebration of Tom Twisleton’s Centenary left his brother poet Henry Lea (1847-1905) in the shade. That was inevitable given Tom’s uniqueness as that rare breed of dialect poet. The two brothers started life up at Winskill two years apart sons of Frank Twisleton affectionately known as ‘The Craven Giant’, ardent in the Temperance cause. Henry’s poems are appended to most editions of ‘Poems in the Craven Dialect’ where we read: ‘Both brothers had the poetic soul, the poetic gift. In the one case it found its apt expression in the quaint and vigorous Craven dialect; in the other, in choice English and carefully polished lines’. This is the first of 79 poems published by Henry Lea Twisleton, younger brother of Craven dialect poet Tom Twisleton, of which a great proportion reflect on the seasons. Henry moved to New Zealand around 1875 where he lived the rest of his life and where the seasons fall differently. Leaves especially fall less with a preponderance of ever-green over…
Read more

Canon John Twisleton
I'm a Sussex based priest, ideas and people person, author and broadcaster. My interests include helping people find peace and touch base with mainstream Christian believing. I have published research about the historic Twisleton family and have friends in Guyana, South America where I used to serve as Theological College Principal and am a Canon of the Cathedral.